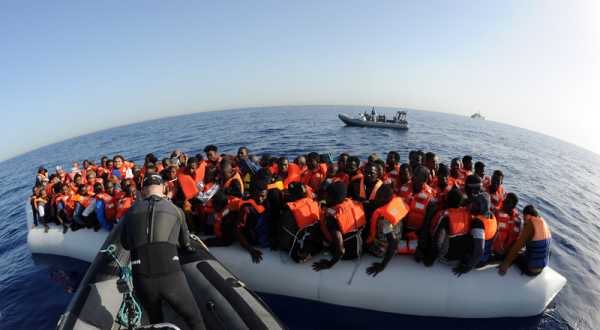 Migrants who set off from Libya by sea, being rescued (Photo: Flickr)

This month, the plight of more than 1,000 refugees and other migrants stranded at sea after being denied a safe place to disembark in Europe has, once again, brought the grave situation in the Central Mediterranean into stark relief.

So far this year, more than half of those arriving by sea in Italy departed from Libya &#x2014; a country facing significant humanitarian needs, where people on the move systematically face horrific abuse and human rights violations.

It’s no secret why many are compelled to flee Libya. The reality is that the country today risks facing a total system breakdown. It has repeatedly postponed its long-awaited (and much-needed) elections, the prices of fuel and bread are soaring, activists and others including people on the move are systematically exposed to grave human rights violations, and political tensions are increasingly bubbling over into violent clashes.

As one of Europe’s closest neighbours and given the dangers still facing many in the country, the EU is well placed to support peace, reconciliation and accountability in Libya. Yet, too often, its relations have been overly-focused on deterring refugees, asylum seekers and migrants from reaching its shores, above upholding the fundamental rights of all those caught up in conflict and crisis in the country.

On Tuesday afternoon (22 November), MEPs have a chance to address this gap and put Libya firmly back on the EU’s agenda as they debate the alarming situation in the country in plenary for the first time in four years.

This is an opportunity for the parliament to take a principled stand, and drive forward concrete change for people in Libya. It could not have come at a more important time.

The current political situation in Libya is untenable. The country has two parallel governing authorities wrestling for power, with rising tensions and volatility sparking fears of a relapse into large-scale conflict.

This is taking place against a background of economic decline, and significant humanitarian and protection concerns.

More than 800,000 people in Libya are currently reliant on humanitarian assistance, and there remain pockets of deep, persistent needs. Those who have been displaced internally or living in the south of the country face grave difficulties due to deteriorating services. Refugees, asylum seekers and other migrants face a particularly desperate situation — lacking legal protection and often unable to access basic needs such as shelter, food and healthcare.

Yet, despite the immense scale of suffering in the country, Libya’s shrinking civil society space is making it harder for humanitarian aid to reach those who need it most.

Refugees, asylum seekers and other migrants become trapped in a vicious cycle of violence from the moment they arrive in the country — often subject to repeated arrest, detention and abuse. Many feel compelled to travel to Europe to seek safety, yet this route is rife with dangers.

More than 1,200 people have lost their lives attempting this treacherous sea journey so far in 2022.

Thousands more have been intercepted by the EU-supported Libyan Coast Guard, and forcibly sent to detention centres where they face systematic violence that may amount — according to the UN — to “crimes against humanity”.

It has become increasingly clear that the EU’s current approach is not only failing to improve the outlook for the most vulnerable groups in Libya, but has contributed to making the situation for people on the move even more perilous. It’s time to fix this broken model and start afresh.

First, the EU and its member states must throw their full weight behind efforts towards stability and peace in Libya. They need to pull all levers at their disposal to encourage Libyan authorities to maintain the fragile ceasefire, fully engage in the political and electoral process, and respect and uphold international humanitarian and human rights law.

If the country is to transition towards peace and democracy, the EU must work with the authorities to guarantee that people can express themselves freely, and that civil society organisations can support all those in need without fear of repercussions.

Second, the EU and its member states must work with Libyan authorities to bolster the country’s infrastructure — including electricity, water, education and healthcare. It’s vital that all people in Libya are able to access public services and social safety nets, without discrimination. Meaningful progress in these areas will be critical before donors, including the EU, shift their focus too far from essential protection and humanitarian support or begin to think of transitioning out of the country.

Third, by now the international community is well aware that Libya is not a safe place for refugees and other migrants. It’s time for the EU and its member states to treat it as such, in line with international law.

The EU needs to take responsibility and guarantee that any support for the Libyan authorities relating to migration — including their support for the Coast Guard — is wholly conditional on upholding the rights of people on the move.

It must push for an end to arbitrary detention and guarantee accountability for systematic rights violations. Meanwhile, it must scale up safe routes away from Libya so people are not forced to risk treacherous journeys in search of protection.

And, finally, they have a responsibility to revive the EU’s search and rescue mission in the Mediterranean in coordination with NGOs, ensuring that those rescued at sea are disembarked humanely and provided with the support they urgently need.

If they fail to take bold action, the Mediterranean will not just become a graveyard for more people fleeing Libya seeking protection, but for its own values of human rights, dignity and equality.